As many symptoms of ataxia telangiectasia, diabetes does not affect all people with AT.

But the ATM protein could be involved in some type of diabetes.

Diabetes is a disease linked to excess glucose in the blood (hyperglycemia), secondary to a defect in insulin production, or an insensitivity to this hormone.

{youtubejw}m_BJWFVQWJI{/youtubejw}
Video: After a meal, glucose from the digestion of food goes through the intestinal wall to the blood. Its levels in the blood increases and then prompts the pancreas to produce insulin, represented by a small green key in this video. By binding to its receptors on cell surfaces, that key "opens" the walls of the cells to glucose to allow them to function (muscle cells) or to store it (fat cells). Insulin also acts on the liver to stop or slow its production of glucose from fat reserves.

{youtubejw}rPcsW3GBMO8{/youtubejw}
The difference with the above video is that the receptor on the surface of cells no longer recognizes the little green key insulin. Glucose can not get inside cells. Its levels in the blood increases dramatically and leads to the consequences described below cons.
In the case of ataxia telangiectasia, diabetes is in rare form: it would indeed present antibodies blocking the insulin that induce a major insulin resistance. Clearly, antibodies would prevent glucose from entering cells by blocking insulin. We are talking about diabetes of type 2. Result:

If, as we shall see later, type 2 diabetes in children with AT has very different causes from that of overweight people, some of the following precautions are just common sense and apply to the general population. Many of tiredness, blackouts or even accidents of life are explained by negligence that may seem elementary:

The aim of this article being purely informative, you will not find all the elements directing diabetics in their life with the disease. Here are just a reminder of the basic rules: 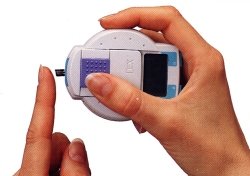 Most current treatments are for overweight or obese adults whose increasing number also explains the expansion of type 2 diabetes. The goal is to keep a not too big but sufficient blood sugar level. Besides the necessary precautions in terms of lifestyle, some of which are mentioned above, drugs exist whose role is to regulate the glycemia. These are:

New treatments that specifically target insulin receptors on the surface of cells are being developed. It seems they are more suited to the type of diabetes that may have the children with AT. Insulin has many similarities with the main growth factor, IGF1, which seems to be deficient among some children with AT (see Growth):

All this does not explain why the insulin receptors on cells can not function properly in children with AT and cause diabetes. One can just see that insulin and IGF1, which has a similar malfunction for the growth part and the mechanism of which is now glimpsed, are very closely interrelated. They are also both involved in other processes of the body deficient in Ataxia Telangiectasia: aging, cancer and neuro-degeneration.

It appears that another protein, P53, directly connected with ATM in the cell cycle control (see ATM: DNA controller ), is also involved in this type of diabetes.


It has been shown as ATM has something to do with the regulation of insulin, which proves once again the extent of its functions and opens new perspectives for research.