With lymphoma, leukemia accounts for 50% of cancers observed in ataxia telangiectasia.

Once again, the central role of the ATM gene in the cell cycle is the most likely explanation (see The ATM gene").

Treatment of leukemia are constantly improving, for our young patients as well.

Leukemias are cancers characterized by abnormalities of white blood cell precursors in the bone marrow, with or without the presence in blood of abnormal cells.

The bone marrow is the site of production of all blood cells from stem cells: 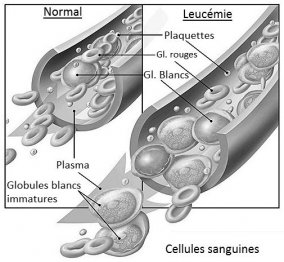 It is an uncontrollable increase in the reproduction of these "babies" white blood cells in the bone marrow that creates leukemia. Therefore, they empeach the production of other vital cells (such as red cells or platelets) and flood the body of immature white blood cells, thus ineffective, which may also block some vital organs.

Some external factors are recognized as potential causes of development of leukemia. Among the main, we find:

But even if they do not constitutent the majority of cases of leukemia, we know that these factors generate DNA breaks in cells and in people with AT and the absence of ATM protein allows these abnormal cells to reproduce. This transformation mechanism is certainly highly contributory to the fact that these patients are prone to leukemia.

{youtubejw}0WKCfiVCXHU{/youtubejw}
The cause of the occurrence of leukemia is still the same: a abnormal quantitative production of immature white blood cells, but the reasons are different. This movie deals with chronic myeloid leukemia caused by a translocation between chromosomes 9 and 22. The final part, which talks about treatment options, forgets to include a new molecule with spectacular results in this type of leukemia: Gleevec (also known as Sprycel or Tasigna)

It may be noticed finally that the boundary between lymphoma and leukemia is not always very marked: in some non-Hodgkin's lymphoma, cells may be present in blood and certain aggressive lymphomas (lymphoblastic or Burkitt's lymphoma) may present an affected bone marrow and treated on a common treatment program to lymphomas and leukemias. Conversely, chronic lymphocytic leukemia are sometimes classified as lymphoma ... not easy to sort things out.

The mechanisms of malignant transformation are very similar and the main difference may be summarized as follows:

Children with AT are predisposed to acute lymphoblastic leukemia and chromosomal abnormalities on chromosome 14 are frequently observed (see Laboratory and Immunity and AT). The treatment of acute leukemia will be to destroy the degenerated cells by chemotherapy fairly strong. But this does not happen without collateral damage and the need to replenish a capital of healthy cells in the bone marrow may pass through a bone marrow transplant.
Generally speaking, treatments have results that are improving and can treat between 70 and 80% of patients. The problem in AT being the patient's hypersensitivity to chemotherapy, it is necessary to adapt the treatments, but conclusive results can be obtained. Non-Hodgkin lymphoma and Hodgkin's disease can be also treated with diverse but usually lighter chemotherapy often possible in day hospital. Sometimes, radiotherapy (radiation) is associated.