Radiation are among the causes that create DNA double-strand breaks in the nucleus of cells.

If these damaged cells multiply, cancer can develop. In reality, everything depends on the dose and repair capacity of the individual who receives it.

As people with ataxia telangiectasia can not repair these DNA breaks (see ATM: DNA controller), , this makes them extremely sensitive to radiation.

As for tobacco, pollution or other known carcinogens, special precautions can be taken to minimize the "radiation" risk. 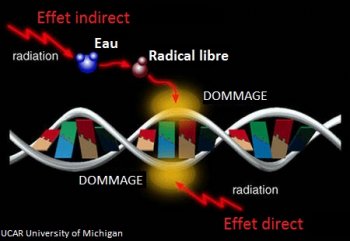 Contrary to common belief, radiation is not only acting instantly by disintegration of the body it is going through, but mainly cause a destructive chemical reaction. This involves four steps:

Radiation in our environment

We are literally overwhelmed by all kinds of radiation: 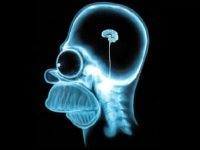 X-radiography ::
Although in recent years, the radiation doses used are less strong, "radio" is still a radiating mean of investigation. Unfortunately, in case of a trauma, radiography is often the most available and fastest way to make a diagnosis ... waiting for the system EOS.

Scanners (CT scan):
They also use X-rays, but at higher doses and can see more details of more body parts. But their limited number, the difficulty to implement them and the cost of each examination limits its use. Scintigraphies:
They are also irradiating examinations as a radioactive liquid is injected to patients (gamma radiation). They allow to visualize the movement of fluids and to detect abnormal network as a blocked artery, the irrigation system of a cancer cluster ... (see Radiation and ionization")
Radiothérapy:

Like chemotherapy, radiotherapy is intended to cause self-destruction (apoptosis - see cell cycle in The ATM gene") of cancer cells by breaking DNA molecules of these cells with high radiation (the chemotherapies are doing the same but by chemically interfering with DNA). They can be administered from outside the body by bombarding the affected area, or inside by placing a radioactive source closer to the tumor.

Problem: in one as in the other case and regarding the current state of the care centers equipment, nearby healthy cells are also affected. The normal healing of surrounding tissue can recover from these injuries, while cancer cells are unable to recover. That explains the differential effect of cancer treatment between healthy and diseased tissues and ultimately their usefulness in the treatment of these diseases.
However, in inducing DNA breaks, chemotherapy as radiation are mutagenic, that is to say they can induce long-term occurrence of mutations in DNA, some of which may accumulate and lead to the development of secondary cancers.

Patients suffering from AT, due to the genetic defect that leads to defective function of the ATM protein, increase the toxicity of anticancer treatment on these two aspects. Normal and immediate damage on healthy cells affected by chemotherapy or radiotherapy "heal" slower and less well as they would in the absence of ATM default. This has the effect of an acute toxicity (normal and transient decrease of white blood cells and platelets after these treatments may be more marked and more prolonged, leading to a higher risk of infection and bleeding ).

In addition, ATM also playing a role in DNA repair by preventing the accumulation of mutations, the patients with AT exposed to chemotherapy or radiotherapy will have a greater risk of mutations associated with these treatments. The risk of developing secondary cancers is higher.

Despite all the advances that promise that these techniques will still be used for a long time (see Radiation and ionization"), awareness of the potential harmful effects of radiation led to development of exams not irradiating or so little that the amount of radiation used is negligible. They are:

{youtubejw width="200" height="150"}rcRm1MrFE8Q{/youtubejw}</div> <div style="text-align: justify;"><span style="text-decoration: underline;"><strong>MRI (magnetic resonance imaging)</strong><br />MRI appears to be the least invasive examination and is not radiating. It merely "observe" the reaction of hydrogen atoms in strong magnetic excitation to determine the nature and shape of the tissue. It can also measure brain activity and is very effective to make a precise diagnosis of the soft tissues of the body. However, the results are much worse on the skeleton.

EOS
EOS is a radiography system developed from the work of French Nobel laureate in physics Georges Charpak. It uses X-radiation at very low level to reconstruct the 3D skeleton. (See Radiation and ionization")


Protecting children with AT

Children with ataxia telangiectasia are very vulnerable to radiation as they are unable to properly perform the process of cellular repair. It is therefore essential to protect them wherever possible. Here are some suggestions, not exhaustive:

Radiation from our modern environment ::
It is difficult to get an accurate picture of the actual harmfulness of certain devices, but nothing prevents us from taking a few precautions, especially for mobile phones: choosing a phone meeting the emission standards, use a wired headset, not keep the phone to close to the body, carry it in a heavy bag ...

Medical field
The general philosophy is to minimize the examinations using radiation, except of course in an emergency. The precautions are:

As a conclusion, whenever a patient with ataxia telangiectasia shows a problem requiring a medical examination, it is essential to ask the question: What is the medical examination that will provide the best ratio: quality of diagnosis/ quantity of radiation. It might be interesting that each child examinations and radiation doses received were indicated on their health records.

However, the continuing progress of medical imaging suggest that less severe doses of radiation will be used in future for medical diagnostics.

In general, the precautions are simple, you just have to think about implementing them.