80% of children with ataxia telangiectasia have an immune deficiency, different from one child to another. To understand the role of this factor in the evolution of the disease, a reminder of immunity is made here before the explanation of the role of the ATM gene in this deficiency and pulmonary effects that it induces.

This article aims to help understand immune problems encountered in ataxia telangiectasia and presented in other sections of this chapter.

Immunity can be defined as the ability to recognize "self", that is to say every single part of my body, and to reject the "non-self", every foreigner who wants to enter it or develop abnormally. We call these intruders antigens.

There are three lines of defense:

The self is recognized through the major histocompatibility complex (MHC),called HLA (Human Leukocyte Antigen) in humans: cells have unique surface proteins to differentiate self from nonself.
Note that in humans, the brain has its own immune system separate from the rest of the body.

They both offer a barrier against micro-organisms:

The second line consists of cellular and chemical defenses:

When aggression occurs by injury, damaged cells release chemical mediators that will initiate the inflammatory response: expansion and greater permeability of vessels to rapidly bring the necessary elements to repair and the fight against infections. The area becomes "red" because of the blood flowing.

These chemical mediators will also attract phagocytes (all white blood cells or leukocytes: macrophages, neutrophils and eosinophils), which are responsible for destroying infected cells, microorganisms and foreign substances by eating them (phagocytosis). Note that phagocytes adhere more easily to foreign particles when these are coated with complement proteins and antibodies (see below).

The third line of defense is to develop a personalized response in front of the aggression and memorize it.

This response may take several days before being effective. It is much faster, thanks to the faculty of memory, if the antigen has already tried to invest the body before and is recognized.

Two types of answers are developed from a "specific network", the lymphatic system and the bone marrow:

Download Media File
The lymphatic system is a network sometimes different from the blood vessel network, sometimes imbricated. Besides his duties as lipid transport and drainage of lymph to purify it from the waste of the body, it is throughout the body the detection and response network of acquired immunity through:

The cellular immune system is targetting the body's cells that are infected by viruses or bacteria, and cancer cells.

The action is carried out by T cells that are derived from stem cells from bone marrow and mature in the thymus (T for thymus). There are two families of T lymphocytes:

The humoral immune responses can be triggered by:

Antibodies are complex proteins for detecting antigens in a specific manner. .

These are glycoproteins formed in a Y shape and:

They are produced by plasmocytes, B lymphocytes that have evolved, marrow stem cells whose maturation also ends in the marrow.

Thus equipped, each antibody may:

- Clinging to antigens
on the surface of the microorganisms membranes (bacteria, infected red blood cells ...) to:

Antibodies are divided into classes or isotypes, depending on the structure of their constant parts: IgG, IgA, IgM, IgE and IgD.
Moreover, one can classify a population of antibodies according to his ability to recognize one or more antigen binding sites. This is called respectively monoclonal and polyclonal antibodies.

Distribution of the roles of immunoglobulins (Ig) class: 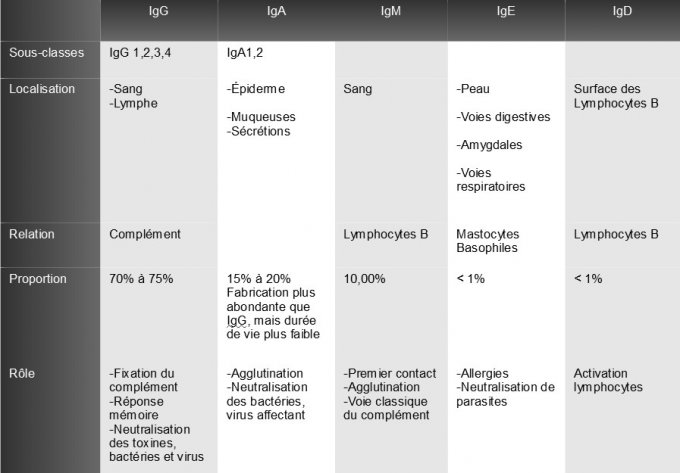 Complement is a set of non-specific proteins that are activated in cascade when the antibodies bind to antigens.
This cascade of reactions has four main effects:

The immune system may be faulty:

The ATM gene is central to the immune system.

The majority of patients with Ataxia Telangiectasia is immunodeficient, but not everyone.

Immune disorders in AT relate to antibodies and T and B lymphocytes, that is to say mainly acquired immunity, the one targeted by vaccines.

The main consequence of immune deficiency in ataxia telangiectasia is a weakness against infectious agents..

Most patients with ataxia telangiectasia develop antibody responses against antigens, such as micro-organisms, but some of these responses may be affected, particularly the responses directed against the polysaccharides (large complex carbohydrates) on the surface of bacteria that causerespiratory infections..

These abnormal antibody responses may be associated with abnormal levels of circulating immunoglobulins. Thus, patients with AT may present in isolation or simultaneously the following deficiencies:

Deficiencies of B cells has implications in the production of immunoglobulins (or antibodies):

At the opposite, 10-15% of patients with AT show immunoglobulin levels well above normal.

The blood rate of T cells may be abnormally low. These abnormal T cells are generally associated with a small or immature thymus. The low rate of T cells does not always increase susceptibility to infection, but over time, this rate becomes smaller and smaller.

Finally, patients with ataxia telangiectasia have a higher risk of developing certain cancers, particularly cancers of the immune system, such as lymphoma and leukemia. (see chapter « cancer »)

Process of déficiency in AT

All these deficits in Ataxia Telangiectasia have an explanation at the genetic level.

Indeed, in the chapter "ATM: DNA controller", we saw the essential role of the ATM protein in the repair of DNA double strand breaks (DSB) in the cells: in its absence the cells with DSB can't work but can still reproduce themselves. This is detrimental to healthy cells whose proportion decreases gradually. The functions for which they are scheduled to take place less efficiently, if at all: the body is weakened and aging is accelerated.

This applies to specific T cells and B cells (which produce specific antibodies: IgG among others).

But as for other body functions, evolution is slow, the expression of the anomaly is more evident on the response of acquired immunity, the one that fits and stores.

The reason lies in the process of individual and targeted response to millions of different attacks. The body responds by recombining for each attack a number of specific genes between them, thus multiplying the possibilities. The same "ingredients" are then assembled in different manners to create an active component perfectly adapted for attack. 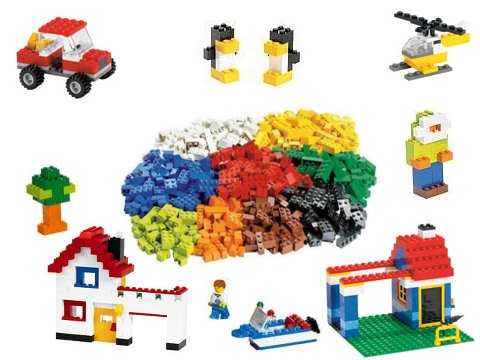 It's a bit like a construction kit: with the same number of pieces you can make an incredible number of buildings ... And the more you have parts, the more this number increases exponentially.

But to build, man must first remove the parts from the packaging: for recombining genes, we must first break the DNA molecule that carries them and cause ... double-strand breaks (DSB), a normal body then repairs, not a patient with Ataxia Telangiectasia.

This is what happens especially on chromosome 7 for IgG and on chromosome 14 for specific T cell receptors (those who recognize the aggresions). In addition to immune problems, it also explains translocations (exchange of genetic material) between these two chromosomes found in laboratory among patients with AT and may help confirm the diagnosis.

Listen to your child. Neglect nothing and remain vigilant.

Avoid exposure to risk: do prevention.

The immune problems are largely the cause.

Research is progressing rapidly to treatment.

You, parents, can make prevention.

The term "pneumonia" refers to lung diseases affecting the deep lung.
The bronchi may also be sick from immune deficiency and recurrent bronchitis, with the development of bronchiectasis (permanent bronchi expansion).

We saw in chapter "Immunity and AT" that people with AT have a combined immunodeficiency, variable according to individuals, which affects both:

Even the mucous membranes (the first barriers) are affected in ataxia telangiectasia (accelerated aging, IgA deficiency). Those of the respiratory system are therefore entry points for frequent and dangerous infections. They are favored by:

The deficit in T cells (the main actors of the specific -with memory- immune response ), which promotes:

The deficit in B cells and immunoglobulins, which promotes:

These deficits may partly be made up by IV of immunoglobulin, but they do not cover the full spectrum of viruses and bacteria. To do this, and according to the deficit, the doctor may prescribe regular and permament medication to a particular antibiotic.

These infections pose a risk of lightning extension and respiratory distress syndrome, irreversible if not caught in time. Even if remission, sequelae may remain with the development of bronchiectasis. 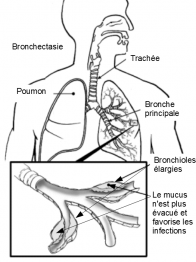 Bronchiectasis
It is the result of repeated lung infections. It is the chronic inflammation and airway obstruction by secretions that damage the bronchial wall.

This treatment is essential to slow the worsening of the lesions. Indeed, bronchiectasis, once installed, creates a vicious circle:

The clinical implications are:

Interstitial pneumonia
Patients with AT may also develop an interstitial pneumonia (see definition at the beginning). It would be the consequence of abnormal lung repair facing the various assaults by deregulation of the immune system or lack of healing after lung aggression (infections, chemical oxidants ...).

The alveoli and the supporting tissue of these cells that are damaged. The final stage is fibrosis with consequent decrease in breathing capacity and a failure to transfer oxygen from the lungs into the blood. This complication is relatively rare (about 5% of patients) but serious, therefore it requires regular pneumologic monitoring to detect and treat it early.

In the bleak picture of ataxia telangiectasia, pulmonary infections are the leading cause of mortality.

But paradoxically, they are also one of the few points on which the family circle can be influential(cf "pneumologist"). In two words: vigilance and prevention.

Moreover, if there are still many unknowns about how these infections destroy the lungs, investigation techniques are in constant progress and treatment are increasingly powerful.