Ataxia telangiectasia is also a progressive neurological disease. This section describes how the different parts of the body are affected.

The process of movements is a very complex phenomenon that involves many parts of the nervous system.

In Ataxia telangiectasia, the cerebellum is mainly affected, but not only.

In "Ataxia Telangiectasia," there is "Ataxia".

During voluntary movement, there is a usual balance between the agonist muscles (active) and antagonist (inhibitory).

In AT, there is a rebound effect: there is no brake in the movement, the subject is over the target due to a late braking action of antagonistic muscles. Ataxia is manifested primarily by troubles in gait, balance and standing, accuracy and movement guidance by sight.

These neurological disorders are exacerbated by fatigue, stress, infections and in maintaining unbalancedposture . Conversely, a appropriate sitting position allows to limit the magnitude of abnormal movements. Ataxia in the OT is not related to muscle weakness or peripheral neuropathy (nerve damage).

Ataxia is also different from balance disorders and dizziness due to damage in vestibular centers (systems located in the inner ear, which measure the posture of a person in space). 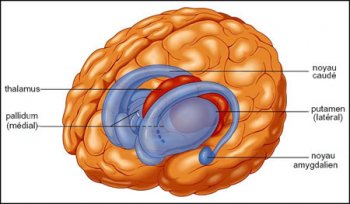 Depending on the country, they include the thalamus or not. (see diagram cons

They are also affected in other diseases such as Parkinson's, where, as in AT, there are problems of tone (rigidity) and unwanted movements.

The cerebellum is the center of the fine coordination of muscle movements and balance control: it controls the fine dosing to apply to the muscles for a given action.

When injured as in AT, in addition to impaired balance and rebound phenomenon described above, speech may also be affected.

For patients with AT, it is particularly Purkinje cells (see below) that are affected.

The information that emerges from the cerebellum is conveyed to the muscles through the spinal cord and peripheral nerves. 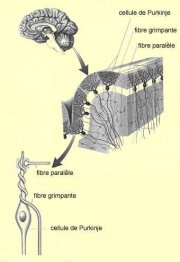 The Purkinje cell is a specific type of neuron in the cerebellum. It is a "communication" cell.

To take one example, the Purkinje cell is a bit like an old phone system operator who was connected with all the lines of the network, receiving all communications and distributing them in the right place. In the modern era, it would be a switch in a computer network.

It is known that these cells are progressively damaged in ataxia telangiectasia, bringing with them a dysfunction of the cerebellum.

The brain stem connects the base of the brain to the spinal cord. It controls among others basic involuntary functions of life such as breathing. It also develops reflexes orders of maintaining balance.

When injured, dysarthria can also appear (difficulty with speech, cf Speech) and / or dysphagia (difficulty in swallowing - see Swallowing)

They transmit motor or sensory information from the spinal cord to muscles (motor) or to the sensitive sensors (hot, cold, pressure, position in space).

In AT, it seems that dysfunctions of peripheral nerves are revealed with age, which may result in some muscle weakness and sensory loss. But generally, central nervous system disorder masks this phenomenon.

In ataxia telangiectasia, the absence of the protein encoded by the ATM gene impacts, according to the procedure described in chapter "ATM: DNA controller", the regeneration of cells or their maintenance in good working condition.

In the central nervous system where neurons do not multiply, the absence of ATM protein might disrupt homeostasis, that is to say, nutritional support and environment of nerve cells. This is known as degeneration of nerves and nerve cells. Nevertheless, therapeutic approaches are followed. Among them, the role of growth factors. Following recent discoveries, they seem to impact the rate of degradation. Thus, the growth hormone GH and its mediator IGF-1 (cf Growth et Diabetes) appear to affect the production of myelin, the insulation of neurons playing the same role as an electrical wire insulation. And it has been shown that the absence of ATM protein disrupts the production and regulation of these molecules for growth.

A team of German researchers have noted a lengthening of life span and neurological and immunological improvement on laboratory AT mice who received growth hormone. Far from declaring victory, this discovery gives hope to delay the effects of the degeneration in AT, thus saving time.

In line with this idea, another German program has just begun on children with ataxia telangiectasia.

Another symptom of AT is the increasing difficulty for the person to use their look and follow a target.

This oculomotor disorder must be taken into account with adjustments in everyday life.

Telangiectasia in the eyes are a completely mild symptom, if not the aesthetic discomfort. They have nothing to do with neurological problems that can impair vision.

Description
Normally, when a noise attracts attention to one side, the eyes are preceeding the head movement of a few tenths of seconds. Conversely, in AT, the head will turn first, then the eyes will follow, but in short jerks. Same thing when it comes to track an object or even fix it, which eventually cause problems, including learning in class to look up and decipher what is written on the blackboard, or even to read. However adaptations are possible.(cf Computer: a tool et For teachers) 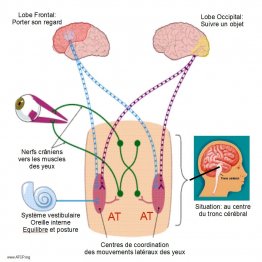 In the brainstem are located coordination centers of lateral eye movements. These centers receive three types of information:

Unlike the first two, this latter function is not affected in AT.

Treatment
Oculomotor apraxia is different from strabismus which is due to impairment of oculomotor muscles.

On other forms of apraxia, treatments are possible, with satisfactory results, based on botulinum toxin injections of the same family as the much more publicized used to eliminate wrinkles ...

Although present more prominently in the eye, télangiectasias are also found on the body and have no connection with apraxia described above. That's why they are developed in chapter "Skin / mucous membranes".

Communication by speech and expression is also impaired in ataxia telangiectasia.

Talk is an effort to patients with AT, which increases their fatigue.

These patients need time to express themselves, so man has to be careful and do not stop at their facial expressions that rarely reflect their actual mood of the moment.

With swallowing which could have joined also this chapter, the degeneration of the cerebellum may cause difficulties in speech articulation and control of facial expressions in patients with AT.

Talking consists in emitting a series of coded sounds understandable by others.

The code of speech, the language, is a purely cognitive mechanism connected to the brain as evidenced by the diversity of languages ??spoken on Earth. 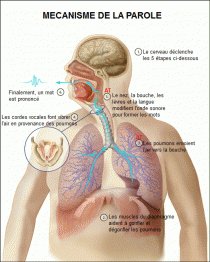 However, produce sounds and reflect his emotions by his gestures and expressions is a neuromuscular phenomenon involving:

The process of speech is as follows:

The interconnections between the different functions are numerous in the face (jaw , tongue and face mobility, absorption, swallowing, breathing, ...). When one or more systems are affected, many difficulties may occur. This is the case for Ataxia Telangiectasia but in this area too, difficulties are different among concerned people. The neurological disorder disturbs the smooth coordination of all muscles involved in the process of speech and expression of emotions in the face. In addition, due to lung infections, respiratory capacity of people with AT can be reduced. The combined effects of these factors are: 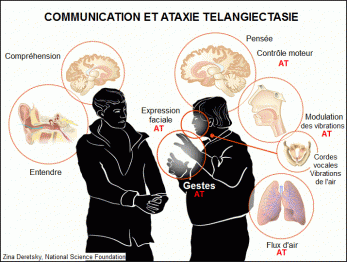 Consequences are numerous and various:

The immediate solutions are simple to implement. They are:

Over time, swallowing becomes a source of difficulties for people with AT.

In addition to efforts that feeding demand, the risks are choking and inadequate nutritional intake.

Adaptive techniques and rehabilitation can minimize these problems.

In the picture of the Ataxia Telangiectasia may appear swallowing disorders, that is to say, the ability to swallow food, liquids or even his own saliva. This difficulty is clearly part of neurodegenerative disorders (see "Body control") and appears only progressively.

Man swallows approximately 600 times per day. There are three phases in swallowing:

Phase 1 : in the mouth
Phase 1: in the mouth The oral stage is the preparation for swallowing. Mixed with saliva, food is crushed to be better swallowed.

Phase 2 : in the throat
When swallowing starts, a sequence of very fast muscle contractions (<1s) implements and involves:

Phase 3 : in the esophagus
The esophagus carries food crushed and mixed with saliva to the stomach and it must empeach it to get back.

Each phase is characterize by a particular problem but once again, they aren't necessarily simultaneous. They are:

Phase 0: before reaching the mouth
Being able to bring food to the mouth. What seems elementary quickly becomes a source of fatigue with a neurodegenerative syndrome. Some simple solutions can facilitate this step.

Phase 1 : in the mouth
Leaks from the mouth: during chewing, it may not be sealed by the lips and the ability to keep a piece of food which attempts to escape may be lost. Difficulty chewing: length to form a ball capable of being swallowed = fatigue.

Phase 2 : in th throat
Particularly among adolescents with AT: problems of coordination in the swallowing sequence. This leads to silent wrong ways without reflexes such as coughing or retching heart to clear the airway of food who want to intrude. Moreover, these body reflexes also give warning of a problem to the entourage who can react quickly...but in AT, on warnings! The wrong ways, ie the content of the mouth that goes to the lungs instead of the esophagus are favored, even dangerous, which can increase the ENT and pulmonary infections.

Phase 3 : In the esophagus
Stomach reflux: acid reflux is usually not pleasant, but in AT, the major risk is the wrong way with a very aggressive stomachal liquid. In the same way as gastroesophageal reflux disease in young children, the fact of introducing foreign objects into the path to the lungs can cause lung infections, still complicated for AT patients.

Swallowing mouth control problems can cause:

This is a specialty ofSLP (Speech and Langage Pathologist to treat this problem. Looking at drugs, beta blockers have sometimes been used, but with mixed results.

Intellectual abilities are not affected in ataxia telangiectasia.

It is very important to let it know by everyone so that the child with AT can take its rightful place in the social life, especially at school.

The psychological impact of this aspect concerning integration and self-confidence must always be taken into account, and consideration by others is the main factor.

Ataxia Telangiectasia does not affect the intellect. One can even say that, by necessity and the will to seek to offset the difficulties by themselves, children with AT develop a unique form of intelligence.

The first consequence is that a child with AT is intellectually capable of following a regular school program and can aspire to higher education. It can, like everyone else, follow a conversation and participate, provided that he's given time to speak and people around make an effort to understand him when speech problems are emerging.

In countries where access and acceptance of disabled suffer a huge delay, the challenges lie in the consideration of the disabling symptoms of the disease, their impact on integration in schools and on learning techniques and traditional communication.

The main objective is therefore to seek and develop tools and resources needed around the patient with AT for his personality finds its rightful place in society. (See « Living with AT»).