The ATM protein is responsible for their detection and "decides" whether to repair them or not, ie of the survival of the cell.

This explains his involvement in the heart of the cancer process.

The DNA molecule has a shape well known with its two strands linked together in a double helix. But it can undergo various alterations and among these, full of breaks called double-strand breaks (DSB). 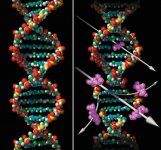 "Non-desirable" DSB may be due to various factors like: DSBs are also associated with normal "physiological" situations in the life of the cell: The role of the ATM protein is directly linked to the DSB. It is present in every cell (in the nucleus and cytoplasm), ready to intervene if these lesions occur. Under normal circumstances, the ATM proteins are grouped in pairs: dimers. In this state, they cancel each other out, leaving the cell cycle proceed normally.

Many proteins are involved in these control mechanisms of potential anomalies throughout the cell cycle. The ATM protein is one of them. It is responsible for detecting DNA double-strand breaks. It does this by itself or through other proteins such as 53BP1 seen on the video below being recruited at the breaks where the DNA of cells is damaged by a laser.

Film description: cells genetically engineered to express a fluorescent protein 53BP1 were exposed to laser radiation of a few micrometers in diameter that generates DNA damage in their nuclei (areas where the fluorescence disappears in both nuclei at the beginning of the film). Immediately, the 53BP1 protein which was dispersed in the nucleus of cells come to focus at the level of detected lesions and thus contribute to the development of cellular responses.

While at rest, the ATM protein were grouped in pairs to inactivate each other, the signal of the DSB separates them and they activate by the addition of a phosphorus atom (procass named "phosphorylation"). Becoming active, proteins ATM trigger cell cycle arrest in S phase (DNA duplication) or G2 (control of genetic material, see Cell cycle).

Then, depending on the "diagnosis" may be engaged:

- A process of DNA repair involving, among others, the protein complex MRN (MRE11, RAD50, NBS1) and the BRCA1 protein. For information, the lack of functional MRE11 causes the ATL syndrome (AtaxieTélangiectasie-Like) and the absence of BRCA1 leads to a very high risk of breast and ovarian cancer (65% and 45%, compared to 12% and 1.4% in the general population)

- A destructive process involving the protein P53, another essential protein since it is found in 50% of cancers in an altered form.

This occurs in most body cells and makes ATM indispensable everywhere. This explains the wide range of symptoms presented by AT patients.

We can also understand that the development of treatments is difficult, as the chemistry of drugs can treat only a portion of these symptoms. The gene therapy, that is to say correcting the ATM gene, seems therefore to be the only way to cure the disease, but it will be difficult and without guarantee of repairing the harm already done.

However, the central role of ATM in the body implies that the research is interested in it.

HERE IS OUR REAL HOPE!!!