buy helvetica,sans-serif; font-size: 1em; background-color: #92d2dd; border: medium solid #333333; text-align: center;">The cell cycle is the set of steps that will lead to the division of one cell into two identical ones: it is called mitosis

Many compliance checks are conducted during this process.

The ATM gene is one of these elements.

The vast majority of cells constituting an adult body is at rest and perform tasks for which it was programmed. Some tissues are constantly and actively proliferating (our skin or blood cells for example). Sometimes, some cells have to be repaired or replaced as they die naturally or as a result of aggression.

The cell cycle is the set of steps that will lead a cell to divide into two daughter cells containing the same genetic heritage. Spurred on signals received from its environment (growth factors), the cell begins the cycle that will lead to the mitosis.. 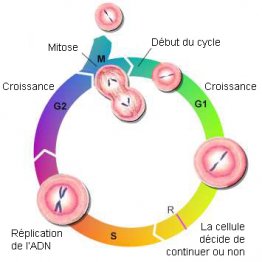 The phases of this cycle are:

Checkpoints of the cell cycle

Throughout the cell cycle, mechanisms will rigorously monitor the integrity of genetic material in the cell nucleus. It is indeed excluded that a cell divides when its DNA is the bearer of anomalies as it would transmit them. 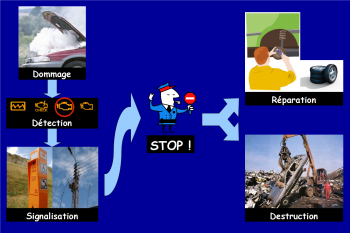 These oversight mechanisms are called checkpoints of the cell cycle.
Schematically, a checkpoint is organized with a detection phase, the transmission of information (signaling), then the phase of implementation of the necessary means to DNA repair or cell destruction by apoptosis if the damage is too great.

The following diagram illustrates some of the many control points (shown as stop signs) that exist throughout the cell cycle and that maintain the integrity of our genome. 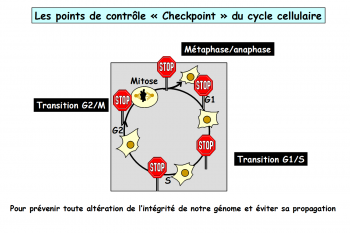