The size of the keyboard

For a person with AT, the first problem using a keyboard is the size of the keys: for example it will be easier to type on the keyboard of a desktop computer rather than on a laptop. 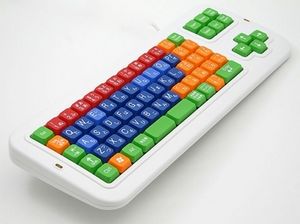 There are on the market larger keyboards, some of them designed for children to learn computing, with big buttons, using colors to distinguish letters from numbers or even vowels and consonants distributed in toy stores for general public at a low price.

Other specific keyboards have been developed for children with disabilities, for example with an alphabetical order of letters instead of the QWERTY order. But they have limited value and are not intended in any case to people who already have experience with computers.

The second problem is that you often need to press two buttons simultaneously for a character or a function.

Again, the advantage of the desktop is that it has on his keyboard a separate numeric keypad compared to the laptop. On the latter however, one can connect an additional pad.

But the simplest solution is to set the correct operating system (Windows, Mac OS, Linux). All propose to use StickyKeys: for a given function, instead of simultaneously press a key combination, you just have to make this combination a key after the other. It is certainly a little longer, but it's very effective. It's just the principle of the "uppercase" key: once pressed, all the letters you type are uppercase, which is not the case if you've used the keys "shift + letter".

A third difficulty is the time of key repetition: if you push too long on a key, the corresponding letter appears more than once.

Again, the solution is in the settings of the operating system where you can adjust the keyboard settings and the repetition time between each letter.

Using the virtual keyboard, the one that appears on the screen and is offered by all operating systems, is not a good alternative method: using the pointing device which presents difficulties for the person with AT increases the operating time, so the fatigue.

Finally, it is very useful for patients with AT to associate the listening of the character to the touch as the confirmation of it or the activation of a function. This way, there is no need to look up at the screen to verify that the action is correct.

Again, these settings are available in the Control Panel of the operating system. Windows from Vista, you must look for the "Narrator" in the accessories. It will also read every kind of text provided it is pointed out.

Some other specialized softwares can also read the character hit and / or the entire sentence with less "robotic" voices and more flexibility in the configuration. But they can be expensive.

To sum up, for the choice of a keyboard, the recommendations are: