80% of patients with ataxia telangiectasia have an immune deficiency.

The immunologist should be, with the neurologist, the referring doctor.

The doctor for prevention

Indeed, while the most visible signs in ataxia telangiectasia are neurological, danger comes mainly from the deficiency of the immune system, causing lung diseases and half of the cancers in patients with AT: leukemias and lymphomas.

In case of repeated sinus or respiratory infections, immune deficiency may be suspected. The balance of immune protection is made through a blood test. It analyses:

Usually, the results found do not change with time and do not need to be repeated unless there is an increased number of infections. 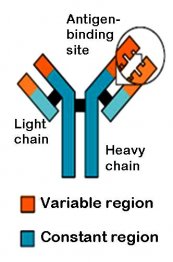 It is not known at present how to manufacture immunoglobulins (or antibodies), especially since they are often very different and specialized in responding to a particular disease. We know however how to extract, purify and inject them without risk of rejection, since they are only molecules. This is not the case for lymphocytes for which a low rate significantly increases the risk of infection.

The arsenal available to the immunologist to treat immune deficiency is therefore limited and can not completely restore the defenses. He may propose:

In France, under the leadership of Professor Fisher (Necker Hospital and Scientific Committee of AT Europe) and the Association Iris, the CEREDIH is the French reference center of hereditary immune deficiencies which includes ataxia telangiectasia. This structure has a network of competence centers located throughout the country and works with the rest of Europe including the ESID (European Society of Immunodeficiency). It is a partner for families and AT Europe from the beginning.